A Letter from Home: How I Remember Mom

Published in The New Leader, September/October 2007

IN SANTA MONICA this past spring, a week after my mother’s funeral, I found myself on a pavement paralleling the Pacific Ocean, unconsciously avoiding the lines between the concrete squares as I walked along. “Step on a crack, break your mother’s back,” the old schoolyard rhyme, ran through my head over and over. Absorbed in childhood, it reflects the instinctive fear children have that their parents, particularly their mothers, could be taken away from them—and that they must do everything in their power to prevent this, even if it means walking funny down the sidewalk.

My mother died at the end of April, just three months after being diagnosed with pancreatic cancer. I am not a child, except in the sense that I’m a child of my parents, and there was nothing anyone could have done this time to save her. She went into hospice care and died at home in California, surrounded by her family. 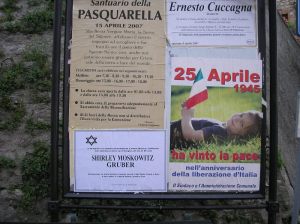 “Serenamente, nell’abbraccio della sua famiglia” is the way I phrased it on the poster I had put up in the village in central Italy where my parents and I  both have houses and, for the past two decades, have spent much of the year. That’s what they do in Italy; they broadcast the loss of a loved one in stark black on white posters that are affixed on village notice boards.

Mom’s death was, in fact, a natural process; grievous for our family and friends, devastating to my father, but a passing we consciously try not to call a tragedy. It was Mom in her way who set the tone. “I’m 86, I knew that one day or another something would happen,” she told me on the phone in January, when she informed me of the diagnosis. “But I never expected it would be this.” After all, her own mother lived to be 96 and had a sister who made it past 100.

All her life my mother was an artist— under her maiden name, Shirley Moskowitz. Even as she slipped away she was concerned about what would happen with her art works. They span more than 70 years of creativity and encompass a variety of mediums, from simple line drawings and sketches to sculpture, oils and the joyously complex, multilayered collages that became her signature style.

Mom started doing collages in the early 1960s, first focusing on subjects that were of interest to her intellectually, but not on an intimate level—landscapes and cityscapes, for example, of Prague, Rome, Israel, even Egypt, where she had never been. From the late ’70s, however, she became more and more immersed in her subjects, using her collages to project a richly textured vision of life as she lived and perceived it, among her family, friends, neighbors, and the local environment.

Many of them are set in Italy, particularly in rural Umbria. Bustling with activity and always exuding a touch of whimsy, they mix dreams and reality but are never sentimental or clichéd.

I guess Mom saw the world differently than most people. Outwardly, she was one of the calmest people I ever knew, yet her inner vision was dazzling. Her works were based, she once said, “on personal experience and are composed to affect the viewer from a distance while at the same time inviting him to participate in the action—to experience through color, dynamic contrasts of light and dark, and various techniques, a reality that may seem fantastic but is still real.”

To achieve this she used a complex process that combined her own sketches, photographs and monotype prints with ink, paint and scraps of paper, textile and other materials. Almost all are densely populated with real people, drawn and elaborated from the photographs that she took incessantly at every social occasion. Whether the overall subject is a grape harvest or the ruins of Pompeii, or a wedding, or a family reunion, they burgeon with life; almost all seem like parties, where everyone and everything has no trouble mixing or mingling.

Mom’s last really articulate conversation was a lively, and sharp, critique of the invitation design for an upcoming exhibition of her work in Los Angeles. We—and she—knew full well it would be posthumous, and the curators had decided to call it “A Celebration.” Mom felt the invitation, which utilized an uncharacteristically dour self-portrait none of us really liked, was not representative of either the style or attitude inherent in her work. “It looks so gloomy,” she said. “Who ever would want to go to an exhibit of that! I am the artist. Tell them that the artist objects to this design.” “Mom, you haven’t lost any of your marbles,” I told her, as I wheeled her back to bed from the living room. “Yes, that’s the problem,” she replied. “What do you mean?” I asked. “Well,” she said, “how would you feel if you knew you were going to die in a few days?”

Mom lived a long, creative, happy life. Her final illness was also actually her first. She was born in Houston and spent half a century in Philadelphia. From the mid- ’80s until a few years ago, when she and my father moved to Santa Monica, they divided their time between Philly and their farmhouse in Italy. Their arrival in the village each May, neighbors told me, was regarded as a welcome sign of spring.

We have always been a close family—my parents, myself, my two brothers, and then their wives and children. Growing up, though, we were never into what one calls public displays of affection. That we all liked, respected and trusted one another were givens, as was the given of love. On her deathbed, Mom cut off one of my brothers when he tried to voice his feelings. “Frank, don’t be sentimental,” she admonished.

Outside the family, Mom touched people in ways that I did not really comprehend until she got sick and the letters, cards, e-mails, and telephone calls began to arrive. Acquaintances she had not seen in more than 20 years wrote about how they would never forget her. Friends of my own generation, and younger, described how she had set an example or been a source of strength in times of trouble. Villagers in Italy with minimal education wrote beautiful notes in careful, schoolchild script. Dad read everything to her; he printed out the e-mails and put them all, with the cards, in a special box. In the brief months of her illness, he barely left the apartment.

MOM IS BURIED in Santa Monica’s Woodlawn Memorial Cemetery. She chose the place— the cemetery, if not the plot itself. As someone whose research and career over the past 20 years has involved visits to cemeteries all over Central and Eastern Europe, I think she could not have made a better choice.

Woodlawn is eclectic and, for Southern California, historic: the final resting place of a wide range of settlers drawn from around the world by the California dream. There are romantic monuments from the late 19th century as well as simple graves of unknown John Does. The city’s founding families have their tombs here, and you come upon epitaphs in Japanese, Persian and Spanish. Memorials honor anonymous Civil War dead and the state’s pioneers. One stone marks the grave of a woman with the uncompromising name of Sarah J. Death; she died in 1912 at the age of 81.

Mom chose the cemetery, but Dad picked the plot. It is next to a little bench and a newly planted sapling. In the late afternoon tall, graceful palm trees cast stripy shadows.

Doug McClure, the brash blond actor who played Trampas on the old TV show The Virginian, is buried a few yards away from my mother. He was, says the epitaph, a “loving husband and father” who is forever in the hearts of his family.

And dashing Paul Henreid, who starred as Ingrid Bergman’s husband in Casablanca and so romantically lit two cigarettes at once for himself and Bette Davis in Now, Voyager, also lies, with his wife, nearby. “Oh Jerry, don’t let’s ask for the moon,” Davis tells him in the famous last scene, “we have the stars.” The simple grave marker bears a star under Henreid’s name, and a rose under that of his wife.

Other Hollywood personalities are buried here, too, as are writers, political figures, and even a professional wrestler. Mom would probably enjoy the company. She was an artist, a mother, a sister, a daughter, an aunt, a grandmother, a friend, a mentor. She was forthright, honest and fair. But she was also a fan—and a romantic.

As a teenager in Houston she cut school one day to wait for her then idol, Nelson Eddy, to exit his hotel. When he did, she stepped forward and presented a portrait of him that she had drawn from photographs. “I’ll hang it in my den,” he told her. Decades later, when I myself was a teenager, Mom took me to New York to see the musical Camelot. Afterward, it was she who led the way to the stage door, where we waited for Richard Burton to emerge. I still have the Playbill on which he scrawled his autograph.

My parents met at Oberlin College in the early 1940s. During World War II, while my father was stationed in Iran, Mom sent him a photo of herself leaning against a wall, wearing a pair of short shorts with distinctive sailor-style buttons. Both she and Dad had recently been jilted, and the photograph kindled a correspondence that led to a marriage that lasted more than 61 years. Indeed, Mom’s cancer diagnosis came just a couple of weeks before she and Dad marked their 61st wedding anniversary. 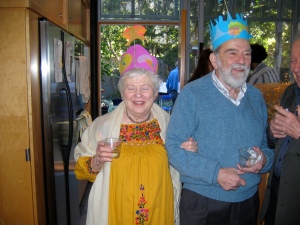 The year before, for their 60th, we had held a party, which they presided over wearing fanciful paper crowns made by the child of friends. This year, despite her illness, we also had a party; small groups of friends and family commuted between my brother’s house and the hospital, where Mom sat in bed in a fluffy pink bed jacket, a present from my aunt, and unlike anything I had ever seen her wear before. The picture of Mom in the short shorts takes pride of place on the first page of the oldest of our family photo albums. A caption, in Mom’s handwriting, declares: “What started it all.” On the same page there is a picture of a handsome young soldier sitting musing in a forest, sent to her by Dad from Iran.

AFTER MOM’S FUNERAL, I, the only daughter, spent several days going through her things—separating what to put away, what to give to friends as keepsakes, what to send off to charities. In doing so, I learned something I had never realized and which, given my own wardrobe preferences, is rather remarkable: My mother did not own a single piece of black clothing.

Mom was very organized. Storage bags were clearly labeled; drawers and shelves and hangers were neatly arranged; shoes were in boxes. Still, before I put anything in the charity bags, I checked pockets and opened handbags to make sure they were empty.

In one handbag, an old brown leather purse that had been made, decades ago, by a craftsman friend, I found something wrapped up in tissue paper and further protected by a plastic bag. I took it out and removed the wrappings. There, carefully folded, was a dark brown cotton garment decorated with buttons. I unfolded it. It was the pair of shorts Mom had worn in the picture. The one that had started it all.